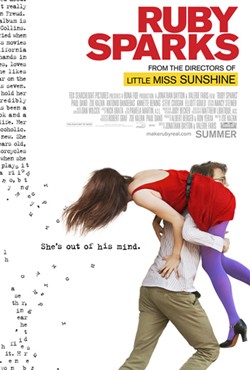 On Friday night we went and saw Ruby Sparks. It's a movie with quite a weird premise (reminiscent of Stranger Than Fiction a while back): a socially awkward successful writer with writer's block somehow unwittingly manifests into existence a girl that he has been dreaming about by writing about her.

After she is 'around', he can then change anything he wants about her by continuing to write.

The film is tagged as a romantic comedy, but I think that's an unfair pigeon-holing of the movie as a whole. There's definitely a big part of the usual rom-com aspects in there, … Read more →

Last night was a fairly eventful night. We started off by going to Southbank to see Iron Sky, which strangely enough, Des really wanted to see after hearing good things about it.

For the unaware, the premise is this: in 1945 Nazis went to the moon and set up a civilisation there to eventually come back and retake the Earth. It's a comedy, and whilst it dragged in portions, it was a very good laugh, but a lot of the jokes will probably only be understood by geek/nerd culture enthusiasts.

On Friday night we went and saw probably the biggest movie of the year, Marvel's superhero conglomerate movie, The Avengers. From the sum of it's previously introduced parts, I had pretty high expecations for this movie and although it didn't fail to reach these expectations, it didn't exceed them either. That's not a bad thing though, it's not often that high expectations are actually met, and overall it was still a great movie.

The real accomplishment of this movie is not the special effects, the overarching storyline, or even really the all-star cast (all of which we really have … Read more →

Now here's a thought: a movie with dragons and vampires in it. How come nobody's done that yet? When it happens just remember you read it here first. 😉

Continuing on with our cinephilic year last year, we've seen a couple more in this past week.

Last week we went and saw the US version of The Girl with the Dragon Tattoo. I haven't read the book nor seen the Swedish film, so I can't comment on how faithful it is to its source material or not, but I did enjoy the movie. It was very intense and confronting … Read more →

So my traditional critical wrap of the year is once again upon us. As a result of all the house building, this year I haven't really played many games at all, so that part of this review might be a little underdone. Balancing that out, this year Des and I went and saw a lot of movies, both theatrically and at home. At my count (which I think is still a little short), we've seen 35 movies released this year.

Best Movie: The Adventures of Tintin

This one was a tough one because no movie … Read more →

This week the complete set of Star Wars movies was finally released on blu-ray. Like the eventual release of the original trilogy on DVD all those years ago, I was of course quite excited.

As is usual with each new release, George Lucas had included a lot of mostly unobjectionable minor changes that might make a little sense, some ones that are completely unnecessary, but also at least one major change that has people scratching their heads in frustration and millions of geeks posting on forums their fury on how their childhood has been ruined (see the 'Han Shot … Read more →

This year Despina and I are making a habit of going out to dinner and a movie at least once a week (providing there is at least something palatable to watch).

We've kept it up pretty well, so far we have seen 20 movies, the majority of which at the cinemas. It's easily the most i've seen at the cinemas in a calendar year, and we're really enjoying doing it. There have been a lot of average or 'just good' movies we've seen, a few 'really good' ones, and only a couple of terrible ones. I'd like to think the … Read more →

In the past week I organised for the inaugural Bribie e-newsletter to be sent out using a professional email service. I ended up using MailChimp, which, other than the very amusing images of monkeys delivering mail, is also a fantastic service for this kind of thing as they provide a free service for less than 2000 subscribers and a monthly send limit of 12000 emails.

You can see the online version of the newsletter here, and if you are interested in getting put on the list, you can sign up here.

It was an interesting experience; since … Read more →

I have been a pretty big fan of the Transformers film series. In 2007 I called the first movie the best of the year, and I loved the second movie even though the rest of the world (at least critically) seemed to despise it.

So I went into seeing the third movie with a bit of hesitation: I was wary about a possible token incorporation of 3D (as with many other recent movies), and of the departure of Megan Fox from the series.

I came out of seeing the latest instalment very happy, if but a little exhausted. The … Read more →

In the past few weeks the middle-click button on my trusty Logitech MX 400 mouse that I got about five years ago was starting to play up. This is especially concerning as the middle mouse button is what I use as melee-knifing in BC2, and the last thing you want in close quarters knife-combat in BC2 is to have an unreliable mouse button for that action.

The MX400 is a great mouse, and a five-year tour of duty is nothing to baulk at, but the time had come for a replacement. Of course five years has seen the MX400 go … Read more →