Since having my transplant, I've been doing a lot of things around the house that I've put off for a while: cleaning out my wardrobe, comms cabinets, rewiring smoke alarm connections, to name a few.

Around the same time that I went into hospital, the NBN was made ready for connections in our area. I've posted on the NBN a few times over the years, but after originally expecting a FTTP (i.e. fibre) connection to be ready sometime around 2015, the Coalition government was elected in 2013, and it took until now to get a HFC connection (i.e. coaxial cable).

Although I did not intend to connect to the NBN for a while just in case it had teething issues in our neighbourhood, because I'm having a bit of time off after the surgery, I thought it might be a good time to change over to the NBN and get it sorted before I go back to work and am needing a reliable, working internet connection. So in the past month I have connected to the NBN, and I've been happy enough to disconnect the Telstra connection.

For all intents and purposes, the NBN HFC connection is the same technology as the Telstra HFC connection that our house had been using since 2015. It even uses the same physical cable on the street, and just operates on different frequencies (NBN is taking over the Telstra cable infrastructure).

Currently, although the maximum download speeds attainable on both the old Telstra connection and the new NBN connection are roughly the same, the main difference is the upload speed. Telstra HFC had advertised speeds of 100Mb down and 5Mb up, whilst the top-tier NBN HFC plans are 100Mb down and 40Mb up. 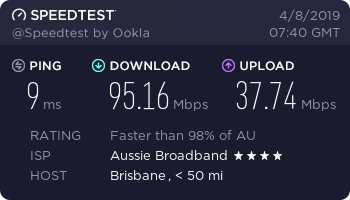 The increase in upload speeds are significant, and of course are very welcome for someone like me that works from home and also does backups up to a cloud provider, but it is a little disappointing that in the current age, all this infrastructure work couldn't result in increased download speeds. But I guess that's what we get when technology illiterate people with questionable associations to content producers and telco incumbents are in charge of tech policy. At least our area didn't get FTTN and the problems that come with using decades-old copper wire that a lot of people are having to deal with.

One great thing about the NBN is the destruction of the Telstra infrastructure monopoly, and thus giving us the closest thing that we've ever had to an even playing field for ISP retailers.

I ended up choosing Aussie Broadband as our ISP. Although I cringe every time at the name, they are the closest thing to what Internode used to be before being taken over by (even bigger cringe) TPG. Their speeds are pretty reliable so far, and they have 100% Australian-based support, but what I love the most is the transparency they provide about their network and service. For example, they even publish their CVC graphs for each POI, so you can be sure that they are properly managing CVC congestion (something you just have to hope other ISPs are doing).