Over the past couple of months I played through Lego Star Wars: The Force Awakens. Although I've liked the previous Lego Star Wars games, this is the first Lego game that I have played since my big Lego reawakening a few years ago.

Although I thoroughly enjoyed the game, I wouldn't say it was perfect, because it had more than a few rough edges: the 5.1 sound balancing was all wrong (the rear channels were obnoxiously loud), and there were quite a few other bugs. Overall though, it was a great game made even better by all the cast from the movie actually voicing their characters in the game (even Harrison Ford!). It's also the first Lego game that I've put in the effort to finish it 100%.

Coinciding with this playthrough, K-Mart started clearing out all of their video games (apparently they won't be selling games any more), and were selling the Lego Dimensions starter pack at a really good price.

I have previously resisted getting Lego Dimensions; it was too overpriced to get started, and I wasn't really interested in the 'toys-to-life' model of the game (e.g. Skylanders, Disney Infinity), which emphasises toy/statue purchases for game experience and completion.

However, if there was one thing that could make me open my wallet for this type of thing, it would be Lego. 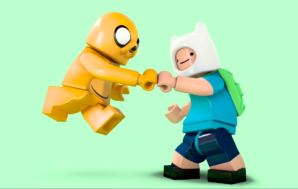 Having characters from so many different franchises in this game is awesome. Just listing them is crazy: all the Lego original themes, Lord of the Rings, Back to the Future, The Simpsons, DC Comics, Doctor Who, Ghostbusters, Jurassic World, and Portal 2 amongst others (and soon Adventure Time and Sonic for the first time in Lego, too!). The only franchises that it aren't currently covered that I would like to see are Star Wars and the Marvel ones. Now that Disney is shutting down Infinity, I would bet those probably aren't going to be too far off.

I've gone a little nuts with the packs that I have bought over the past few weeks, but I take consolation in the fact that I haven't paid the retail price for any of them. There are some pretty good deals out there at the moment because a lot of stores are clearing out their first year Dimensions stock.

It's a good time to get in now, as it looks like a lot of the future Lego games are requiring at least the starter pack for their integrations: the stand-out for me being next year's Lego Batman Movie.