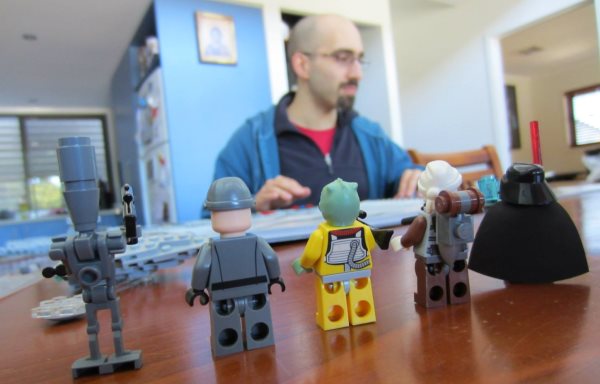 Just over two years ago, I saw this video of one the biggest and most terrifyingly awesome Lego sets: the Super Star Destroyer (10221). I remember being awed by it, as it awakened my childhood love of Lego combined with my continuing adult love of Star Wars.

I can't remember a specific point in my life when I stopped playing with Lego. Like every kid born from the 1970s on, my family had loose Lego that we would make neat things with.

Rather than just loose Lego, it was around the start of the 1990s that I can remember getting and wanting Lego sets. My parents had spoilt me with a few decent sized sets over the years, and from what I can remember (and most are still at my parents' place!), these are the sets that I had in roughly chronological order [with the theme they belong to]:

I remember playing for hours with the Aquanauts vs. Aquasharks theme. I'll also never forget that Lego left in a car in the hot sun is never the same afterwards, as I unfortunately learned with the Deep Sea Predator :(.

Anywho, back to the story. After seeing the video for the awesome Lego Super Star Destroyer in 2011, I posted this on Twitter and Facebook: "Must. Not. Get into. Star Wars Lego!! RESSSSIST!! :S". Two days later my Mum showed up at my door with the box of 7964: Republic Frigate in her hands :D.

Yes, my Mum is awesome.

But she unleashed a monster. After building that set, I said "6 hours of building later, i think i've re-fallen in love with Lego 🙂". And that was the truth.

A few weeks later, in the toy sales that year I bought the great 7965: Millennium Falcon set, and the construction of our house started soon after. It was kind of fortunate that it did, because as all of our money went into building the house, it stopped any further reckless Lego-related spending.

Fast forward two years, I have started a new job, and after getting a Myer gift card for my birthday earlier in the year, I decided to decorate my desk at work with some Star Wars Lego. I bought 75003: A-wing Starfighter in this year's toy sales, and was reminded of the Super Star Destroyer (SSD) that I had previously passed off as a flight of fancy.

Upon checking eBay, there was an auction for a sealed SSD set in Brisbane that was ending the following day. Just before it ended, I made a speculative bid on it. The bid was for a lot less than it retailed for here in Australia, but more importantly, I could pick it up from the seller and avoid high shipping costs for the big size and weight of the box.

The auction went right up to my maximum bid, and I was surprised, excited, and terrified that I won it, and that I had spent a pretty significant amount of money on Lego.

I started building the thing last week, and at 3100+ pieces, it is currently the 8th largest Lego set (by the number of pieces) ever released. I'm about 3/4 of the way through, and after about 12 hours worth of labour, I am loving this build. 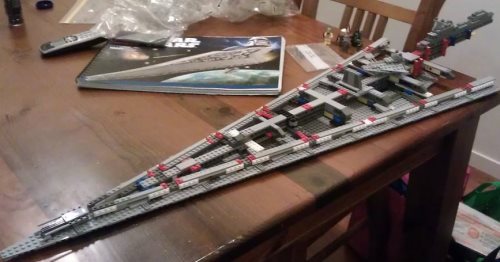 There is just something about the Lego building process that I love setting my mind to, even if it is just following along with the instructions. I love seeing the engineering, the structural support, and watching layer-by-layer as it comes together with the external detail left mostly to last.

I fear that this set might be spoiling me as well; as you can tell by the aforementioned list, there's not much more that is bigger than it, and the ones that are that I'm interested in are a lot more expensive. For example, you'd be lucky to find a sealed set of the Ultimate Collector's Millennium Falcon for less than $3000 on eBay.

Considering the monetary cost, I really wish that Lego would become a bit more affordable. But as it stands I'm also kind of glad that it isn't, as it makes the purchases much more sporadic, and the result just that little bit more special.