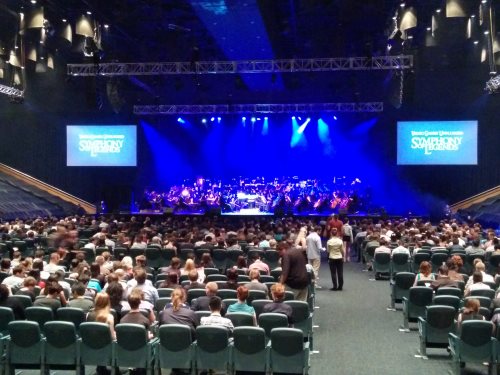 Tonight we had the immense pleasure of going to the Symphony of Legends, which was the Queensland Symphony Orchestra (and an accompanying choir) performing a collection of video game scores.

In my tweet tonight I mentioned that it was an interesting mix of high-class symphony regulars dressed in suits and gowns, as well as geeks, some dressed in shorts.

There were some really great pieces, but for me the highlight was the Journey score. It was fantastic to hear it performed by a live orchestra, not to mention being conducted by its own composer, Austin Wintory.

Other honourable mentions were the Bioshock compilation, and the great but sad Heavy Rain suite, whose mournful tune was very pertinent considering its composer's (Normand Corbeil) death earlier this year.

The final listed performance was the powerful Dragonborn Theme from Skyrim, but I would have much rather had another of Jeremy Soule's works included; his immense score from Total Annihilation is probably still one of my favourite soundtracks from a video game.

The only downside of the night was the venue. The Brisbane Convention Centre is not a great venue for an orchestra. In my opinion, it has very poor acoustics, and our seats were not totally facing the stage, not to mention the air conditioning being oppressively loud during the quieter pieces of music.

Overall, it was a very enjoyable night's entertainment. Now I feel like going back and playing through all those games again!

1 thought on “Symphony of Legends”