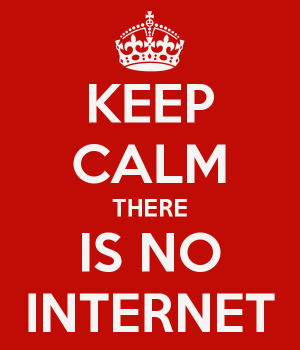 This past week, we were without internet for a full three days. It doesn't seem like much, but I can't remember a time in the past 10 years that we were completely without our main internet connection for so long (disregarding temporary connection performance issues).

I'm not sure what caused it, and despite Internode's (my ISP) best efforts, Telstra haven't given any explanation as to why my whole phone line was unceremoniously disconnected. Internode were great throughout the whole ordeal, keeping me informed every day (sometimes multiple times), and proactively noticing another Telstra stuff-up before I did: Telstra originally only reconnected the phone service without reconnecting the ADSL.

Although it was very much a 'first-world problem', the lack of internet access had a profound impact on our usual routine (e.g. I couldn't work from home my usual two days), and it was only bearable due to my mobile's decent 4G connectivity.

Being without it for a couple of days highlights how much I (and, I assume many others) depend on the internet in our daily lives. I don't think I would be exaggerating in stating that for most people, internet connectivity now rates as a higher priority over traditional telephony.