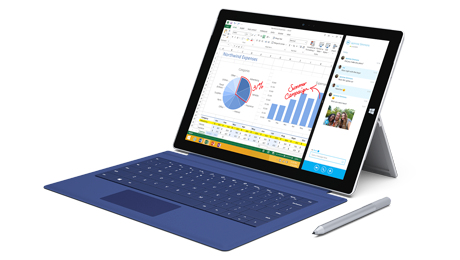 Our portable computer, the laptop known as Viktor, has been getting on a bit this year. At four-and-a-half years old, it's definitely into the senile years of its technological usefulness.

I started looking into getting a replacement earlier this year, initially looking at ultrabooks, but after Microsoft announced the Surface Pro 3, it seemed perfect for what we wanted.

We got the i5 256GB model (of course with a Type Cover), and after using it for a couple of weeks, I believe that it is the almost perfect compromise between a tablet and a laptop.

But that's the thing: it's not an excellent laptop, and it's not a fantastic tablet, but if you want one device that can satisfy both those uses, then this is extremely good.

The main thing that amazes me is how something thinner than an iPhone 4S (and also so light at 800g) can be a fully usable x86-64 computer. The engineering is all-round outstanding: as a laptop the Type Cover is very usable (although still somewhat inferior to a traditional laptop keyboard/touchpad), and the killer tablet feature is the new kickstand. The stylus integrated with OneNote is a nifty feature, although one I wouldn't use too often.

I've really enjoyed using it recently as a handy tool for going through digital Lego instructions. It's great propping it up with the kickstand - in either orientation - and going through pages with a flick of the finger, with quick pinch-zooming for more detail. The other thing I have been using it for is Steam Home Streaming, but I think I might leave going through that for a post of its own.

The Surface also really brings the best out of Windows 8.1. This is the operating system's ideal use case, and the hybrid laptop/tablet nature highlights what Windows 8.1 does right. As opposed to the initial release of Windows 8, 8.1 now has brief tutorial hints at the beginning to ease you into the basics, and after getting a hand of those, it's easy to see what Microsoft were aiming for with Windows 8. They still have a way to go, not to mention underestimating how badly traditional keyboard-and-mouse use of it was/is.

Overall, I think the Surface 3 is a fantastic achievement by Microsoft, both of engineering and showing what Windows 8.1 excels at.

In terms of a name that would succeed Viktor and those before it, nothing much immediately came to mind, so I aptly named it 'Serf'.