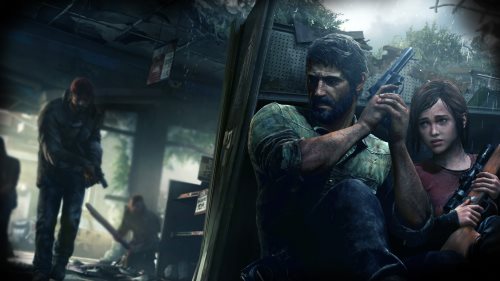 Over the past few weeks, I have played through The Last of Us (exclusive to the PS3). This might surprise some, considering my abject aversion to playing any game that requires a decent amount of aiming with a controller. Although I still suck miserably at using control sticks to aim, the game was definitely good enough for me to endure the humiliation of having it configured on the easiest possible settings in order to get through it. That, and the $30 price tag made it an easy gamble to make.

The Last of Us is a fantastic game, and although it uses a very familiar trope for its setting (a 'fungus' (i.e. zombies)  destroying society), the way the characters and the story play-out is most definitely not of the usual mould for this type of game.

Before going further, I should warn that the rest of this post may contain massive spoilers for a few games, including The Last of Us, Bioshock Infinite, and Mass Effect 3. If you haven't finished those games, it's probably best you stop reading here.

The ambivalent and inconclusive ending of The Last of Us is what struck me most about the game, and also got me thinking about game endings in general. Compared to movies, it's even more of a rarity in games when things aren't, one way or another, nicely wrapped up in a relatively 'happy' conclusive ending.

I remember people criticising me for my scathing opinion of the original ending to Mass Effect 3, telling me: "Oh, you're just upset that it wasn't a happy conclusive ending". That definitely isn't the case; I can handle inconclusive or even depressing endings, as long as they're done well in the context of the game, the story, and the characters.

Probably the two of the best 'sad' and/or inconclusive endings have come in the last year, and they both have been fantastic games. The ending to Bioshock Infinite was definitely not a happy one, with both major characters effectively jointly committing suicide to prevent a timeline from taking place. Nevertheless,  I found it a satisfying ending to the journey of that game.

The ending to The Last of Us did not wrap up anything at all, either between Joe and Ellie or in the wider zombie setting. But in the context of what I played through, it also was a satisfying conclusion.

Those two endings made sense and were satisfying for me in the context of the journey that I, as the player, had made to get there. Without having to repeat why, the ending to Mass Effect 3, whilst also being sad and/or inconclusive, was terrible in the context of its journey.

Depressing and/or inconclusive endings can be immensely effective and satisfying, but effort has to be done in the game, the story, and the characters in order to be able to pull it off.