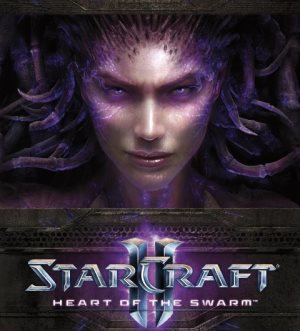 It's fair to say that I'm not much of a StarCraft fan. As I alluded to previously when Wings of Liberty was released, I'm much more into the story that the StarCraft series is telling rather than the actual games themselves. Wings of Liberty was a great continuation of that story, and I was really looking forward to the next chapter in the recently released Heart of the Swarm.

So I guess it is a tad ironic that after playing through Heart of the Swarm that I might have enjoyed the gameplay a little more than the story itself.

The story, without trying to spoil anything, is a little half-baked in my opinion. Nothing much new really happens except for one notable scene at the end. It's a love/revenge/love/revenge/confusion type of plot, where other than the death of one major-ish character and the slightly-less-evil nature of another, has us back to the pretty much the same scenario as before Wings of Liberty.

I enjoyed the gameplay more than I expected to, but that's probably because I had such low expectations after the first instalment. I liked the 'evolution' options of being able to customise the units to my own style of play, but as with some other reviewers, I felt that the campaign was probably a little too easy.

Nevertheless, I will be waiting for Legacy of the Void to be released. Hopefully the interval between now and then won't be the almost three-year gap like it has been between the first two instalments.