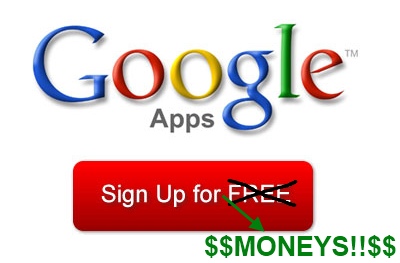 I'm a big Google user; and by that, I don't just mean that I use their search engine.

Over the years, I've increasingly centred my online life around the company's products: I use Gmail for email, Google Calendar is now my organiser, I have an Android phone that syncs to both, and recently I also used Google Docs (now 'Drive') for collaborative docs and spreadsheeting during the house construction, and so on.

But in considering all that, probably the single product that I've voluntarily advertised, espoused, and assisted friends and family in terms of setting them up with, is Google Apps. For the unaware, Google Apps allows you to register your own domain (like lucascosti.com or thecostis.com), and be able to use nearly everything Google offers under user accounts on that domain.

For example, many years ago I registered thecostis.com, and after setting up Google Apps, my parents have email addresses on that domain that allows them to use Gmail, Drive, Calendar, and all the other Google services from a custom email address at thecostis.com. I have assisted many friends and family setup their small businesses on Google Apps too.

In the past, this has been free as long as there are less than 10 users on each individual domain (it was previously free for 50 or 100 users in years past). There are the standard Gmail storage allowances and features on the free version, but other than the custom email address, it's pretty much a standard Google account.

Earlier this month, Google quietly announced that they would no longer be offering the free version of Google Apps, even for personal use. Thankfully, all existing free accounts will remain unchanged, but new accounts will attract a $5/user/month or $50/user/year charge.

So if I were to sign up thecostis.com as a new account today, having 5 users on that account (of which only 2 are active and the rest are either forwarded or inactive), would cost me a minimum of $250/year. That's a lot of money, considering I pay less than a third of that to host 4 websites with a local Australian business, compared to the global conglomerate that is Google really just doing a bit of DNS and MX handling for a custom domain. The features are the same that I would otherwise get for free on a normal Google @gmail.com account (don't forget that like a normal free Gmail accounts, free Google Apps users still get served advertising...).

I can't think of a precedent for Google previously offering a free service, and then totally removing it in favour of a paid model. What makes it even more astounding is that Microsoft still offers free custom-domain email hosting at Outlook.com. If you had told me a few years ago that Google would start charging for something which still has its ads, and that Microsoft offered for free, I would have called you crazy.

Overall it's a very disappointing change of direction for Google. I understand that they're there to make money, but I really can't justify for personal use or for a small business with only a few employees to pay $50/user/year for what a free @gmail account can do, just for Google to handle a few a few DNS and MX records and queries.

Is this another step in the direction of Google abandoning it's "Don't be evil" slogan?