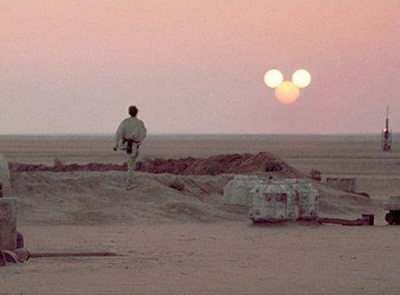 This is kind of old news now, but nevertheless it's going to be 'current' for the next few years.

Whilst we were in Hong Kong at the end of October, news broke that Disney had reached a deal with George Lucas to acquire Lucasfilm and all its subsidiaries and intellectual property for the sum of around $4 billion. I had to check multiple websites and multiple sources to make sure it wasn't some kind of huge practical joke.

Although $4 billion sounds like a lot of money, when you look at what Disney is acquiring it doesn't seem all that much to me: Star Wars and Indiana Jones franchises and the very lucrative licensing rights for both, the premier Hollywood special effects and sound companies in Industrial Light & Magic (ILM) and Skywalker Sound, as well as video game developer LucasArts. I would have thought ILM alone would have been worth half of the price tag. Heck, Disney paid $150 million more for Marvel in 2009, and surely all of Lucasfilm worth more than Marvel. Unless there is some funny licensing deal going on with George Lucas in the background, I reckon that Disney is getting an absolute bargain with the deal.

Of course the irony of me being in Disneyland and wearing the R2D2 with Empire Mickey-ears cap and riding Star Tours multiple times mere days before the announcement was not lost on me.

The other big bombshell that was dropped with the acquisition announcement was that Disney is planning more Star Wars movies, with 'Episode VII' scheduled for release in 2015.

This has been met with cautious optimism by most Star Wars fans. We have seen what a generally good job Disney has done with Marvel and the movies that have been produced since they were acquired (see my opinion on The Avengers earlier this year), and surely they can't do much worse than George Lucas' screenplay and directing for the prequels.

The general consensus amongst fans seems to be that with the right writers and directors, and a plot that respects the 'universe', there's no reason not to expect that Disney could pull off something really good like they have done with Marvel recently. Now that Lucas won't be writing dialogue or directing, we 'should' see higher quality results.

As it seems Disney is planning sequels to the existing films, it raises the question of how new plots will deal with the existing 'Expanded Universe' (EU) storylines that have been established by officially licensed comics, books, video games, and alike. Although that material is generally considered Star Wars canon, Lucas himself has shown that he doesn't mind overriding and contradicting it with plot points and material introduced in the prequels.

Whilst Disney could use aspects of the EU for plots in the new movies, I'd really prefer they didn't; some of the plots and stories, like clones of the Emperor and Vader etc. are downright cringe-worthy, although others like Michael A. Stackpole's X-Wing novels are pretty good. In my own humble opinion, they should try to break from the 'Vader' narrative in episodes I-VI, and go for something fresh, new, and original.

Regardless of what they do, it should make the next couple of years and beyond very interesting for Star Wars fans...