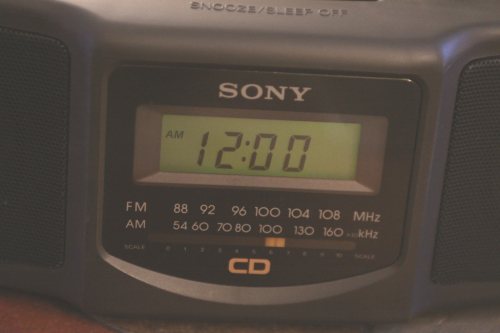 In this past week I said goodbye to my faithful clock radio that has been my bedside accompaniment for the past 17 years.

My Dad had got me the clock radio/CD player (Sony ICF-CD800) on an overseas business trip in 1995; I was 12 at the time and marvelled at the ability to play CDs in my own bedroom. Yes, CDs!! Remember those? 😛

It played its last CD quite a few years ago, and since then I've really only used it as a clock and an alarm. It's a considerably sized device because of the CD tray and speakers, and the bad speaker-to-number-display ratio meant that the decreasing accuracy of my sleep-induced blurry vision, and also the requirement for more space on my bedside table for my Kindle and books, predicated the need for a replacement.

There seems to be a general lack of quality dedicated clock radios nowadays, I guess a lot of people probably now use their phones. Anyway, I ended up replacing it with a Sony Dream Machine ICF-C414, which has a huge clockface. There are a few differences I need to get used to though; the main one being the snooze time. The old one was 8 minutes long (why 8, I have no idea), and the new one is 10 minutes long. It also has the awesome feature of being able to set a longer snooze time of up to 60 minutes by repeatedly pressing the button.

On Friday night we went and saw Looper. It was a decent movie without being that great. Bruce Willis played his usual self, whilst Joseph Gordon-Levitt did an awesome young-Bruce-Willis impression for his role. However, as a time travel movie it seemed very inconsistent with how the plot dealt with the time travel scenarios.

Without spoiling anything, in parts it would seemingly affect characters in one way, and in others another; depending on what would be convenient at that part of the story.