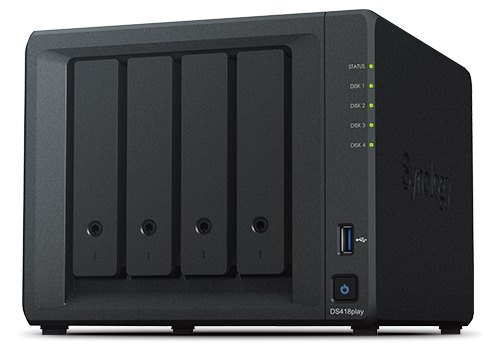 Until just recently, the oldest still-serving piece of technology in our household was our two-disk Synology DS211+ NAS that we've been using since 2011. It's been a fantasticly reliable device, and still had one of the original HDDs operating in it.

The storage has only recently started to get full (we don't store that much data), and I know from experience that mechanical spinning HDDs don't last forever. Rather than try to increase the storage by just swapping out a drive - each drive in the NAS was configured as a separate volume - I decided to replace the whole NAS.

I did this for a couple of reasons. Firstly, the NAS is old and it's definitely done its fair share of service, but I also wanted a better performing NAS that I could run a decently responsive Plex server off at the same time (at the moment the Plex server runs off my computer, with the storage pointed at the NAS).

Secondly, I wanted some disk redundancy to cover against hard drive failure. Of course, redundancy is not a backup, and I have multiple backups of all our important personal data, but I don't for the movies and TV shows that I have digital versions of on the NAS.

To cover both of these reasons, I decided on spending a bit of money on a more premium 4-bay NAS with a decent processor. I opted for the Intel Celeron-powered Synology DS418play, and populated it with four Seagate Ironwolf 2TB drives for a total capacity of 6TB with 1 drive redundancy. Side-note: apparently WD drives, including their 'Red' series for NAS usage, still 'feature' the annoying 5 second click.

It turns out that I was replacing the old disks just in time: as I was copying data off the oldest disk, it started throwing warnings for multiple bad sectors.

I've been extremely happy with the last 7+ years of our old Synology, it is actually still receiving updates and support, so going with Synology again was a no-brainer. Their Synology Hybrid Raid (SHR) also means that I'll be able to update the capacity of the array in the future by only replacing 2 out of the 4 disks.

The read/write (almost performing at full gigabit both ways) and Plex performance has been great, and my only critique is that, unsurprisingly, having 4 HDDs spinning now makes it a little louder and more noticeable on the desk than the previous NAS.