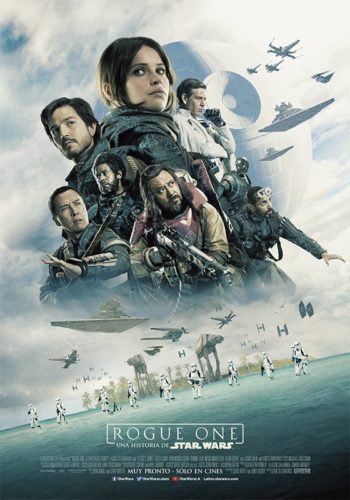 It's another year, and another Star Wars movie in this post-Lucas Disney era. I have to admit, when it was announced I was quite apprehensive about these 'standalone' movies. This year it is Rogue One, the story of how the Rebellion managed to get their hands on the Death Star plans.

Like last year's Force Awakens review, I don't think I can properly put my thoughts down without containing spoilers, so you have been warned: SPOILERS AHEAD!

Let's start with the good. I liked the overall story, and I loved how it explained how the rebels got the plans. I also loved how they explained why the Death Star had its fatal flaw (previously made fun of). Good on the plot there. I liked how they were brave enough to basically kill off all the 'good' guys in the movie. Some people are calling this "Star Wars for adults", and it is hard to disagree there.

Generally, the movie was really well shot and directed. Other than the glorious definition of modern cameras, it felt like it was set in the original Star Wars era. The actors' performances were decent, with K-2SO being particularly memorable. I really enjoyed the final space battle. It feels like it's been a while since we've had a decent space-based battle, so I appreciated that. Also, phwaaaaooorr, how good was that Vader scene at the end when he goes to town on the rebel troops trying to stop him in the corridor? Brilliant, that scene gave me chills.

Ok, now the bad. The first hour of the movie felt a bit disjointed as they tried to set up all the pieces of the plot. Lots of chopping between planets and places, and needing lots of captions to explain where we were (IIRC, something that has never been done in a Star Wars movie). I'm not sure what could have been changed to make it better, but it didn't feel right.

As a lot of people are talking about, I personally can't understand why they had to go all uncanny valley with digital actors for Grand Moff Tarkin and Leia. The latter's brief appearance was just terrible and completely unnecessary. That one shot didn't need to be there at all: a back-of-the-head shot really would have sufficed.

Tarkin was a different story. Some of the scenes of his digital doppelganger were actually really good; it was hard to tell it was fake. However, most others were ok-ish, but still distracting. I think they could have either minimised his role in the plot, or did the scenes in such a way as to avoid exposing the digital actor full-on as much as they did. Adding to the unnecessary was reusing shots, mostly line-for-line, from the original Star Wars for pilots in the space battle. I think for fans it was obvious and distracting, and again totally unnecessary.

My other main complaint was the final part of the plot of locating the data drive with a stupid hand-operated robotic arm (come on!), and the cliché of having to go up to some stupidly impractical outdoor point on a tower, with controls for a radar dish on a stupidly exposed platform, in order to transmit the plans. It's one of those things done for a more climactic scene, but as far as I know, it wasn't really explained why the controls would be that way.

Overall I would rate Rogue One as good, but not great. It's definitely worth watching, and it will be interesting to see how it stands up on repeat viewings.

Postscript: It was interesting to see how many shots and lines were in the trailers that didn't make it into the film. I find it personally annoying when they do that, but apparently the film was significantly altered in the final few months before release (requiring a lot of re-shoots) to make it not as dark. The final product was already pretty dark, so it'd be interesting to find out exactly what the initial cuts of the film were like!