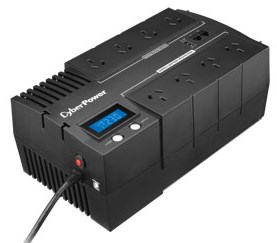 Ever since we moved to this side of the train tracks, despite being only 500m away from our the unit we used to live in, the power reliability in this neighbourhood has been very dodgy. Although we live in a relatively affluent area in modern city in a first world country, I would not call the power in our area 'reliable'.

We seem to have a power outage roughly once every couple of months, and that's not including the ones caused by weather events. It's not like I expect the power to stay on during a major storm or heat wave, but almost all of the power outages that have taken place in this neighbourhood in the past 5 years have occurred during relatively 'normal' conditions.

I'm getting sick of rolling the dice on unexpected power outages affecting my computing equipment, especially my NAS and my main PC that has an SSD, which apparently are very sensitive to power interruptions.

So I decided to get a UPS, if only just for the NAS, computer, and monitor.

After first getting a power meter, I estimated my average total electrical load of these devices to be around 100W. Just for fun I measured my PC doing normal web browsing, which used ~70-80W, vs a simultaneous CPU and GPU stress test, which used ~360W. To be honest, that's less than I expected.

Although I thought that I would need a 1000VA+ UPS, the best price point for a decent UPS to decently cover my average load was an 850VA CyberPower BRIC.

At $139 it was good value, but we'll see if it stands the test of time. At least I now have peace of mind that Energex's dodgy network in this neighbourhood probably won't take out my computer and important data.