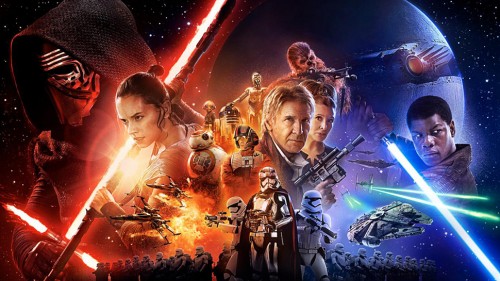 Ok, to get the warnings out of the way, I considered writing this post as a spoiler-free one, but with the amount of crucial plot points that I want to write about, I don't think that is possible.

So, do yourself a favour, and see this movie as soon as you can, because if you are at all connected to the internet, there is not much chance that you will be able to go very long before you are spoiled for at least one major plot point in The Force Awakens. That said, you have been warned: SPOILERS AHEAD!

I'll try to keep this one mostly brief, because there isn't a shortage of people on the internet giving their $0.02 about the movie.

Overall, I really enjoyed it. It's a fantastic Star Wars movie, without being perfect.

However, let's get the things that I might not have liked out of the way first. I think the fan-service points might have been just a tad over the top. Not by that much, but I think they reached just a tiny bit too far. In terms of plot, I think it was a bit thin, although that didn't diminish the movie, as the plot took a back-seat to introducing new characters and reacquainting us with the old ones. Points like 'Where the heck is the Republic, and why aren't they actually in this fight? How is "The Resistance" different?', 'How exactly was Han and Chewie in the right place to find the Falcon', 'They came out of lightspeed in the atmosphere? Pfff', etc does bother me just a little in hindsight.

Some characters I was disappointed in not getting enough screen time, and I'm thinking especially of Captain Phasma, who could have been any generic trooper commander for this movie, rather than a kickass female villain in chrome armour.

Onto the good things.

Something must also be said for the screenplay. This is probably the single biggest difference that made this movie so much better than any of the prequels. To have such great dialogue (kudos to Lawrence Kasdan), and to have the actors directed so competently is the real night-and-day difference compared to the prequels.

I felt the casting for the new characters was spot on. I was immensely impressed with the characters of Finn, Rey, and Kylo Ren. The actors all owned their respective roles, and each brought something new and different to the table.

Rey as the lead that was female (rather than just being a female lead) that kicked ass not because of her sex, but just because she did. Her reveal as 'the' new Force user was a lovely twist, and probably exposed my inherent sexism expecting Finn to be the one (although they did lead us to that incorrect conclusion in the trailers).  Finn as the new male brought his own unique type of motivation and humour, too. Each performance was different from anything else previously in Star Wars to warrant the attention in this and future movies.

Adam Driver's performance as Kylo Ren was especially notable for me as being what Anakin in the prequels should have been. Driver (and JJ Abrams) did so well portraying the inner conflict, torment, and rage of a youth succumbing/succumbed to the dark side, but without it coming across like a whiney teenager like Christensen did in the prequels. It's a fine line to tread, but I felt it was delivered extremely well.

Now to the elephants in the room. Other than the two new good guys, this movie was mostly about Han Solo and his son. It seemed like Harrison Ford just slipped back into the character effortlessly, and again, also credit is due to Kasdan and Abrams for it as well. Han getting killed off genuinely surprised and shocked me. Up to now, my theory was on Chewie getting killed, but I thought this twist was a brave advancement of the story, which again looks to be centred on the Skywalker lineage and their continuing battle with dark vs light.

The rest of the plot seemed peripheral to this. A vital droid with map to Luke, an evil First Order doing evil things, big Starkiller Base capable of destroying worlds, an Supreme Leader Snoke orchestrating things; the plot was very familiar and not that innovative, although I think this was purposeful.

What makes this movie is the characters, and the interactions and delivery of the actors performances complemented by great writing and great directing. That it ended with son killing father is probably fitting, and it will be interesting to see Ren's nature as a villain in the future films.

I've already seen this twice, and it got better the second time around. I know I'll be seeing it many more times. It's great to be this excited about Star Wars again.