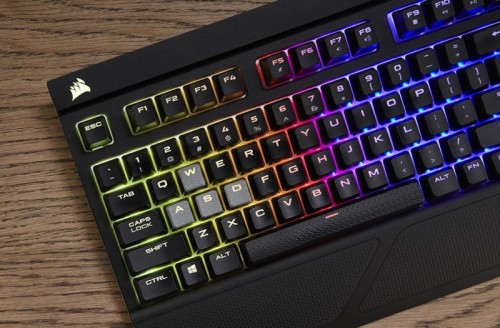 My trusty almost-7-year-old keyboard, the Logitech Illuminated Keyboard, unfortunately has started to go on its way out over the past 6 months or so. I have really loved this keyboard, it's easily the best keyboard I have ever used. But, a few sticking and failing keys meant that I  begrudgingly started to look for a replacement.

Long post ahead! The TL;DR version is that I got a new keyboard, the Corsair Strafe RGB with Cherry MX Silent key switches.

Now onto the tale:

I started looking at mechanical keyboards, as they seem to be all the rage at the moment. I wasn't sure of what type of mechanical switch that I would like. I was going between the Cherry browns and reds, and what decided it for me was the price.

Mechanical keyboards aren't exactly cheap, but I managed to get a Logitech G710+ for just over $120. I really liked the feel of the keys, but even though the G710+ is supposed to be quiet, the noise was still too much. I eventually sold it to someone at work for a small loss, and started my keyboard search again.

At this point, I would have instantly repurchased the Logitech Illuminated keyboard if I could. They don't sell that model anymore, but after some extensive googling I eventually found that there is a replacement model that is sold in the US, the K740. I instantly ordered it from Amazon, but after a quick glance at the Amazon reviews, there seemed to be something amiss.

The reviews linked to this thread on the Logitech forums, and I couldn't quite believe what was being described. For the newer model, using the key combination of Shift + W + Space would not work. Any amateur gamer would know how important that key combination is, and for a keyboard to not be able to do that is definitely a deal breaker.

It seems that the W combination is one of the only Shift + Space combos that doesn't work on the K740, and that definitely seems fishy. Even super cheap keyboards can accomplish that combo (heck, even my cheapo work K200 can). The general consensus is that Logitech has deliberately crippled the K740 for gamers in an attempt to push more gaming-inclined people like myself to purchase a keyboard from their more expensive Gaming series.

Disregarding the fact that I had already tried that, there was no way I would even consider a more expensive Logitech keyboard because of this trickery. I cancelled my Amazon order before it had shipped and started my search once again.

After being burnt by mechanical keyboards and Logitech, I then started to look for a decent non-mechanical and non-Logitech keyboard. One that kept popping up in my searches was the Razer DeathStalker. The original DeathStalker only comes in green LED lighting, which is a no-go for me. I don't really care about lighting one way or the other, but if it has lighting, I can only stomach it being white or blue.

Lucky for me, Razer had just announced the DeathStalker Chroma, which has a fully customisable lighting gamut. Once it started to sell in Australia, I bought it right away. Despite being expensive for a non-mechanical keyboard, it seemed a fit for what I was wanting. The initial experience was good, but not long after being alone with it on a quiet morning, I noticed something.

When the keyboard lighting was on, there was a distinct high-pitched noise coming from the keyboard, sort of like the sound that a bad quality power transformer makes. The kind of noise that older people can't really hear (does that mean that I'm still sort of young? :P). I took it back to the store for an exchange, but I opened the replacement on the spot and it had the same issue, so I opted for a refund instead.

This was the first time that I have bought Razer hardware, and needless to say, I wasn't too impressed (the only other Razer product I have is the Sphex mousemat). Even more concerning was that Razer removed a politely worded thread that I opened on their forum describing my experience. Say what you will about Logitech, but at least they let consumers post about negative experiences with their products, and do not censor their forums. Very, very, poor form, Razer.

So it was back to square one.

I briefly considered getting the Cherry MX Red version of the Corsair K70, but I just couldn't justify the price, and after trying out my cousin's K70 with Des present, I thought even that was too loud. So it was with great interest that I read that Corsair was coming out with a keyboard featuring a new Cherry switch, the Cherry MX Silent, that would be exclusive to them in a new Corsair Strafe RGB model.

Conveniently, the Strafe RGB Silent was also significantly cheaper than the K70. Umart finally got the new keyboard in stock last week (I had preordered for a much cheaper price than it is selling for now), and I've been using it over the past few days.

Although I wouldn't say that the Cherry MX Silent switches are anywhere near 'silent', they're definitely the quietest mechanical switch that I've used, and it seems to have passed the Despina test for the noise.

My only gripes with the keyboard is the lack of dedicated volume and multimedia keys (they are mapped to the function keys, but I actually like to use the normal function keys, such as F5). I have managed to get around that issue using the decent Corsair keyboard software to switch the function keys between their normal and modified state, along with using an AutoHotKey script for volume control because the Corsair software does not let you hold down the modified key for constant volume changing.

It's been quite an ordeal over the past few months sorting out this new keyboard. It's seen me lose a lot of respect for the previously beloved Logitech, and will probably see me never touch another Razer hardware product again. Hopefully this new keyboard will pass the test of time as the previous one did.