It's no secret that I am a fan of Yoshi, but it is only recently that I truly considered how absolutely horrifying the concept of the Yoshi games are.

Yoshi enters a world with the main aim of getting to the end. Along the way he encounters primarily 'Shy Guys', who as their name implies, often aren't even doing anything other than walking around minding their own business, and sometimes even just sitting down doing nothing.

Despite these innocuous creatures posing an almost completely negligible threat to the dinosaur/dragon that is Yoshi, he proceeds to tear through the area consuming each of them with one swift pull of his long tongue, and then immediately digests them and excretes them out as an egg. If that wasn't enough, this nightmarish creature then uses its own eggs as damaging projectiles to hurl at other innocent flora and fauna.

In almost every situation Yoshi could take a non-violent approach by utilising his incredible jumping ability to jump over these poor animals and peacefully pass through their area. Instead, he ruthlessly devours them, and if he already has enough of an egg arsenal accrued, sometimes he even spits them back out at other creatures rather than wasting effort excreting more eggs. As Yoshi murders all in sight, he also pilfers their environment of all its gems and sunflowers.

Yoshi is a wrecking ball of destruction, murder, and pillage as he smashes through these areas in his bloodthirsty quest for revenge over the abduction of his kinsfolk.

This gruesome reality is the core of the Yoshi gameplay, so it is little wonder that in today's high definition big screen living room, Nintendo opted to go with a yarn/wool theme for this latest game. I assume this was to cover up the sickening truth of what is happening on screen behind a palatable visage; it's only wool and yarn, right?

This carnage-worshipping game still somehow managed to only be rated G.

Yoshi's Woolly World is one of my most anticipated games of this year, and it has been a long time between console-based Yoshi games. Yoshi's Story was released in 1998, and it wasn't even that good. The original fantastic Yoshi's Island was 20 years ago (way to make me feel old, Nintendo!). 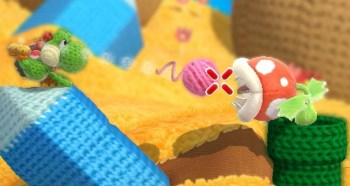 Yoshi's Woolly World can be as hard as you make it. If you just want to clear a stage, it is easy. However, if you want to try and collect all the yarn balls to unlock other Yoshi, or collect all the sunflowers to unlock the special stages, it can be a very difficult game for even a seasoned platformer.

Speaking of the special stages: some of them are designed by sadistically evil game designers, they are that difficult. I literally spent 3+ hours trying to complete one of them.

Overall, the worship of violence is hidden behind an insanely cute theme, and I love this game to bits. If you have a Nintendo Wii U, this game is a must buy. If you don't have a Wii U, this game should make you seriously consider getting one.

* Just so we're clear, this post is mostly satire. Yoshi's Woolly World is an absolutely adorable game that is suitable for everyone, especially young children.