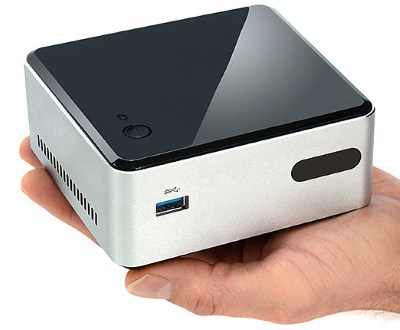 For the past 6+ years, a WDTV has served as the trusty media player for our living room: firstly playing stuff off an external hard drive, and then off our NAS.

Although the latest one is still going strong after almost 4 years, I recently saw a Plex Home Theater setup running on an Alienware Alpha, and was impressed at the great visuals and easy experience of the platform, as well as the 'on deck' items when watching through a series.

Despite the Alienware Alpha being an impressive living room gaming PC, it is way overkill for what I need it for: namely just being a Plex and Steam Home Streaming client. Although needing a Plex server running on my main desktop (Executor) 24/7 irks me a bit, the reality is that the desktop is almost always on when we are at home anyway.

I settled on a tiny Intel Celeron NUC for the client, which plus memory and by reusing the SSD from the old decommissioned Cannon only cost ~$200. The NUC also has an IR receiver built-in, so I can control it with my Harmony remote.

For the OS, I tried using the Linux-based OpenELEC-PHT distro, but basic things like clear sound output and IR controls was very buggy.

I ended up just using a spare license of Windows 7 that I had (which is also eligible for the upcoming free Windows 10 upgrade). With nothing else but Plex Home Theater running on it, it's usable from a cold boot in about 15 seconds, and from standby in under 5. I'm quite happy with that even if though I have to put up with Windows updates, but it means that I can also easily use it as a Steam Home Streaming client.

We've been using Plex Home Theater on the NUC it for a few months now, and have been extremely happy with it overall!