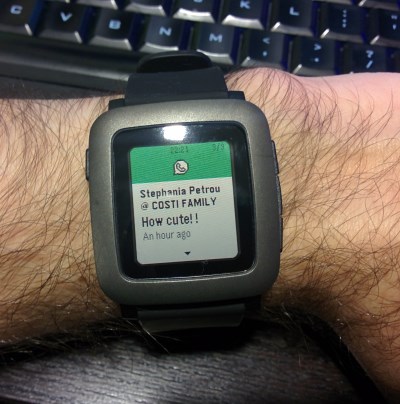 I got the original Pebble smartwatch in November last year, and since then it has become an invaluable tool in my day-to-day tech world.

I received my Kickstarter Edition black Pebble Time a few weeks ago, and overall it has been a stellar experience.

Pebble have been fast in rolling out updates to the watch, too; in a recent update they've already responded to some criticism of the backlight brightness and vibration strength, and now those two functions are configurable to taste. Nice.

The microphone is great, but although it normally captures about 90% of what I'm saying accurately, it of course fails miserably whenever I try to show people how awesome it is. The 'Timeline' interface is also another awesome feature. I've already used it for work many times, especially when I've forgotten what room a meeting is in, and I was already away from my computer.

Battery life is a little shorter than I had hoped, but it gets me through 4-5 days comfortably. Hopefully some improvements can be made in that regard as its software/firmware improves over time, like the original Pebble did.