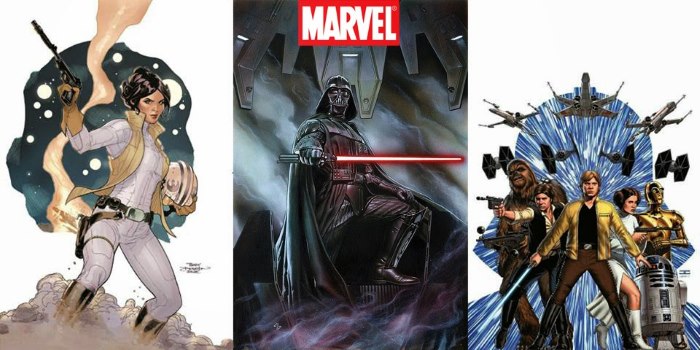 Following on from the recent peer pressure in buying a Wii U, the same perpetrators at work have also revived a long-lost interest of mine: comics.

I didn't have too many comics as a kid, but the ones I did get I enjoyed. Specifically, the first issues of the Itchy & Scratchy and Bartman comics, and the occasional  Simpsons and a few Star Wars ones.

The Star Wars ones in general were mostly underwhelming. I didn't like the stories, especially ones like Dark Empire. This issue was further compounded when the Star Wars prequel movies were released, as the new movies contradicted and muddled a lot of what had been previously published under the Star Wars brand as 'Expanded Universe' (EU) material.

I won't get into the specifics of Star Wars canon history, but I was mostly happy that following the Disney acquisition of Lucasfilm and the Star Wars IP, they decided to wipe the EU slate clean, rebadging that material as non-canon 'Star Wars Legends'.

From now on, all published Star Wars material will be guided and approved by the 'Lucasfilm Story Group', and aims to create a single consistent canon.

It is with this new canon in mind that we come to the new Star Wars comics. Unsurprisingly, Disney ended the Star Wars comic license that publisher Dark Horse had since 1991, and gave it to its subsidiary, Marvel. In the past few months, Marvel has started to release all new  Star Wars comics with stories guided by the Lucasfilm Story Group.

So in the past few weeks I have bought my first new comics in over a decade. Whilst I will reserve judgement until things get really rolling, so far I have enjoyed the first two issues of the Star Wars comic, and even more so with the first issue of the Darth Vader comic.

Overall it is also good to know that (fingers-crossed) continuity and consistency in the Star Wars canon will be kept tightly under control this time around.