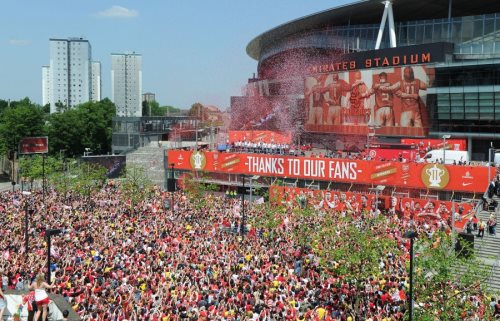 It's been 9 long and painful years in the making, but Arsenal have finally won a trophy. The club has been the butt of jokes in the past few years, especially following the humiliating loss to lowly Birmingham in the relatively worthless League Cup final in 2011. Sites like http://www.sincearsenallastwonatrophy.co.uk/ with the accompanying hashtag of #sincearsenallastwonatrophy have long been used to taunt Arsenal fans.

After the FA Cup triumph last week (in horrifyingly Arsenal-esque fashion, might I add), those taunts and jibes have been reversed. The aforementioned hashtag is now a taunt to all of the other clubs whose seasons weren't marked with silverware. Celebrity fans like Matt Lucas tweeted stuff like "#SinceArsenalLastWonATrophy I bought some milk and it's still fresh". Gold. (or silver).

In other football news, this past week also saw me play my first game of futsal/indoor in over a year, and it was probably the first rigorous exercise I've done in as much time too. As expected, Tuesday and Wednesday proved difficult to do anything that required moving my legs.

However, despite that pain, it was a good type of pain. Compared to fybromyalgia pain, it actually goes away the more you warm up and move around, and that's fine by me.