I was a big fan of the first Transformers game from High Moon Studios, War For Cybertron. When its sequel, Fall of Cybertron was released in 2012, we were in the middle of preparing to go overseas, so I didn't notice it too much. Some time last year I bought the game, but it had been sitting on the shelf waiting to get played while I was playing a few of the bigger PC titles from last year.

Just after New Year's, I finally got the game out and started playing it for a few hours. But then my PS3 died. 🙁 I was in the middle of playing the game, then all the game events stopped triggering, and stuff just seemed on loop.

After numerous attempts at resuscitation, the prognosis from multiple internet sources was that the Blu-ray drive had failed, which  apparently is not uncommon for the original 'fat' modelled PS3s as they get on in age. I had originally gotten the PS3 back at the end of 2008, so I guess I can't complain at its 5+ year lifespan. However, it is a little disappointing as this is the first console I've ever had fail on me.

In considering a replacement, I was not interested in the PS4 as it's not backwards compatible, but even more-so, it still can't do the other things I still use the PS3 for: like being a DLNA client for photos and music, or even more bafflingly, it can't play 3D Blu-ray movies (seriously?!).

As Sony doesn't repair the old fat PS3 models, I was faced with the choice of paying $175 for a refurbished 'slim' model, or to buy a new 'super-slim' 12GB model for low-$200s and then installing a hard drive myself. Although the super-slims are of a lower quality, I went with it as I'd rather have a full warranty. 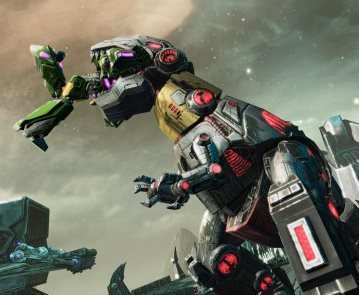 So after waiting for a hard drive bracket from China (it's stupid they don't include one), I finally got around to playing and finishing Fall of Cybertron this weekend.

Overall, I loved it. Great sound, decent graphics, and lots of Transformers goodness. There was a tonne of variety in this game; I lost count of how many characters I played as, as well as their differing styles. All the big names are there: Optimus, Megatron, Starscream, Bumblebee, Jazz, Soundwave and others, but I most enjoyed playing as Grimlock in dino mode. 😀 There's something so satisfying as breathing fire and chomping on enemies T-Rex style.

There were a few frame-rate issues throughout the game, but overall it was a very satisfying experience.