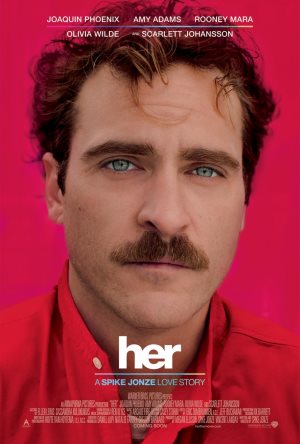 The movie is set at some time in the nearish future (where high pants are seemingly fashionable), and it centres on an introverted writer who has a relationship with an intelligent computer program.

It was quite a provocative film, focusing on the nature of relationships between people, technology, and consciousness in general.

Overall I found it quite a strange movie, being amusing at times, as well as extremely uncomfortable at others.

I enjoyed the exposition of how we, as people, react and interact with software and technology in general, and how that may be different from how we react to other people.

There was a scene where after a very human-like get-to-know-you conversation with the newly intelligent program, she asks the main character for permission to go through his computer to help him organise his stuff. Most of us are fine to let a computer program go through our stuff for a purpose, but what if that 'program' genuinely seemed human? Are we ok to let something that seems like another person go through our personal stuff? The hesitancy shown in the movie was telling.

The movie reminded me a lot of the consciousness character 'Jane' from Orson Scott Card's Ender's Game series, which I am reading at the moment. Some people react to an 'artificial' intelligence as they would other people, including having intimate relationships, whilst others revile at the concept.

I think there is also an aspect of the 'uncanny valley' playing itself out in these relationships, for they seem normal, but can you really have a relationship with something that doesn't have a body or physical existence?

I think the movie is a dark horse for Best Picture at the Oscars this year, but it's probably a little too techy to be seriously considered by the old fogies 😛