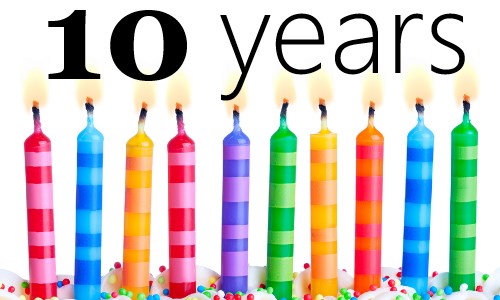 Wow. Today marks 10 years since I started this blog. I must have missed the 10 year mark of the website itself (which was on 13 July 2013), but it was with the launch of this blog 10 years ago that things really started to get interesting (at least for me 😛 ).

If I was honest, 10 years ago I don't think I would have bet that this would still be going a decade later. At the five year mark I was seriously considering giving it up, but over the years I've come to the realisation that this blog is mainly for my own personal benefit, and even if it doesn't get much traffic or comments, it's a good outlet for my own pent-up writing needs.

Looking back, those early blog years are mostly cringe-worthy stuff, so I'm not going to link to many of those early blog posts (but here's the first 😉 ). Long time readers will remember the site intro animations that I did at the time (I'm especially proud of this one, which totally dates the era).

This site and this blog has come a long way since it started 10 years ago. Facebook didn't exist back in January 2004, everyone was still slowly getting off LiveJournal, Blogger was only recently under Google's stewardship, and WordPress was barely six months old. This blog spent most of its life living on a very heavily customised version of  the 'Plugged-Out' blog script, before I finally migrated it to WordPress in 2012.

The life of this blog over the past 10 years has seen me go from a 20 year-old IT student at UQ, to a married 30 year-old graduate now working as a technical writer. It's seen a lot of big events in my life: a broken foot, my graduation, buying our first home, our wedding and honeymoon, the loss of my hair, the onset of chronic health issues, the 2011 floods, and building our house, just to mention a few.

Since the rise of social networks like Facebook, and especially since my illness, the blog posts that I have written have tended to be less about the intricate details of my life and it's happenings, and more a platform for various reviews and opinions. I guess that it is also a by-product of settling into working life (less noteworthy events as you get older).

The frequency of blogging has also declined over time, but I think that is also a result of social networks like Facebook, Twitter, and Google+ providing an easy platform for short updates and easy sharing. Back in 2004 you needed a blog for that kind of thing, so after I got onto Facebook in 2007 (as well as Twitter in 2009, and Google+ in 2011), this blog stopped being the platform for that kind of stuff.