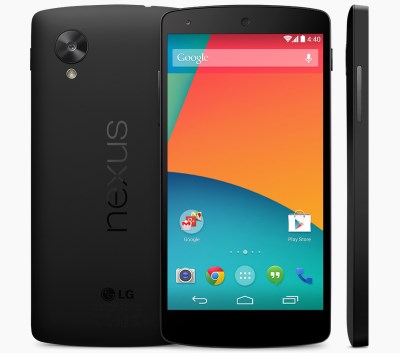 The two-year mark on my HTC Desire S was coming up, so over the past couple of months I have been looking for a new phone. My criteria was a mid-range (and mid-priced!) Android phone that I've normally gone for, and one that has 4G so it would be a noticeable upgrade.

The Desire S was a great phone, so in sticking with HTC, I had my eyes set on a HTC One Mini. It was around my price-point, and it wasn't as large as the top-tier phones like its bigger brother. I was about to pull the trigger and buy one, until Google released the Nexus 5 last week.

I quickly ordered the Nexus 5 on the Friday, and it was here the following Monday. This is my first vanilla-Android phone, and there are a couple of things that surprised me after coming from HTC and Sony developed handsets.

One main thing which I found lacking in vanilla Android is the lack of proper notifications on the lockscreen (e.g. seeing who you missed a call or received a message from). This is solved by lockscreen widgets like DashClock, or the one I am currently using: NiLS. Also, Google using Hangouts for SMS is currently a buggy and incomplete experience. None of my SMSs were matched to contacts (displaying the number only), and a few other deficiencies has meant that I'm now using the Handcent app for SMS.

Another thing that is bugging me after coming from the HTC is the lack of proper headset controls. Apps can solve the headset control issue, but using these types of apps unfortunately prevents the music controls from showing on the lockscreen.

Other than these bugbears, the Nexus 5 has been great. The 4G speeds are nothing short of phenomenal (depending on the coverage). On one speed test I got 73.21 Mb/s down, and 31.21 up. It was so good that Optus even retweeted my tweet of it, and after which I had to admit that I was actually a Virgin customer, and not an Optus one directly (Virgin is an Optus subsidiary).

In terms of the newest Android version, KitKat, there are some really good additions. The new dialer feature of matching unknown incoming calls with data from the internet meant that, on Friday, I was aware of an unwanted recruiter call before actually answering the phone. Very cool.

I'm also deliberately trying to use this phone without rooting it, and am still getting used to it. Hopefully it lasts the test of time.