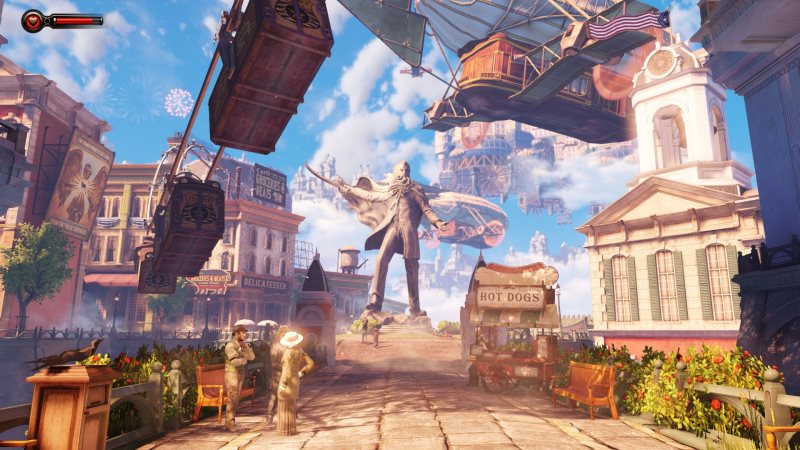 There are few single-player games that I can remember playing that right after finishing them I have gone: "holey moley, I have got to play through that again". Bioshock Infinite is one of those games.

If another game this year can beat Bioshock Infinite at any 'Game of the Year' awards, it has to be one phenomenal game, because at the moment I really can't see how anything is going to top it this year.

At first impression, it seems like Bioshock Infinite is just Bioshock but in a city in the clouds instead of a city underwater. Whilst that is not necessarily incorrect  (it is the same type of shooter with special 'hand' abilities), to limit the game to such a simplistic description does it a great disservice.

Firstly, the visual 'art' and style of the game is mind-blowing. Whilst Crysis 3 was amazing for its degree of visual realism, Bioshock Infinite is amazing for its more arty style. It won't win any realism awards, but that doesn't make it any less spectacular than games like Crysis. The art style, and especially the vistas full of fantastic lighting and use of colours (e.g. see above), blew me away multiple times.

The gameplay itself was also surprisingly impressive. Much more open than its predecessors, the new 'skyline' rail system is implemented fantastically and adds another quite unique dimension to the combat. There is the usual 'vigor' abilities ('plasmids' in the previous games), but I found it a little confusing that whilst these abilities were supposedly an open and accessible product in the game's society, that almost none of the enemies you fight actually utilise them at all. I found it less of a scary-type of game compared to the original, although it does have its moments.

I really can't mention much story-wise that isn't shown in the trailers or reveals without seriously spoiling the plot for anyone that hasn't played it. Bioshock games are known for their twists, and this one does not disappoint. The use of time and inter-dimensional travel as a plot device is great, and it is built-up and paced really well throughout the game, but it also results in a total mind-fudge.

Your main companion in the game, Elisabeth, is implemented superbly both from a character point of view as well as a gameplay one. She's not an NPC that you have to escort and take care of the whole game, but quite the opposite: she provides valuable assists in combat by tossing you ammo and medkits when you need it, and helps scavenge money and ammo at other times. Just watching her as you explore the surrounds is also surprisingly interesting.

One of the biggest compliments I can give Bioshock Infinite is that although I got the game for free as part of my graphic's card bundle, I actually feel like paying money for the gaming experience I just finished.

I remember back when I played the first Bioshock in 2007, I was blown away by the ambience and graphics. After the comparatively lacking impact of Bioshock 2, this new instalment in a new setting worthily matches and exceeds the original's graphics and ambience, whilst delivering a much stronger and hard-hitting story and more character-driven experience. Overall, it's an unforgettable game.