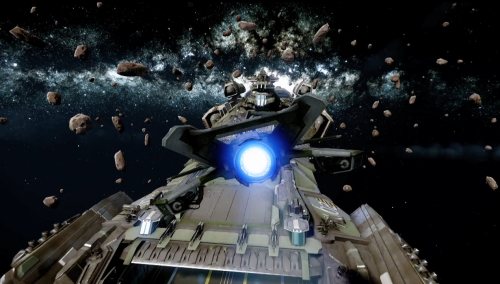 Starting while I was overseas, and now gathering pace in the past few days, is the buzz surrounding the latest crowd-funded mega-hyped game. You may recall my initial foray into crowd-funding with the Kickstarter campaign for Planetary Annihilation, well now a project has come along for a long-lost genre that I am even more psyched about than my love for Total Annihilation successors: space-simulators (space-sims for short).

Going back half a decade (!), I have previously detailed my love of PC-based space-sims and my despair their disappearance along with the joystick, and my attempts at re-capturing those vintage gaming moments. I hearted greatly those great Star Wars space-sim titles like X-Wing vs. Tie Fighter and X-Wing Alliance, but even more so the fantastic Wing Commander series.

So imagine my delight at learning of the ambitious project by Wing Commander-creator Chris Roberts at wanting to make a new space-sim universe developed with modern graphics for the PC that has a fully fleshed out single-player/co-op campaign, with an additional MMO component.

Titled Star Citizen, it is now just winding up its crowd-funding drive on both its own website as well as Kickstarter, having already blown away its $2 million aim, and has now raised well over $5 million, apparently making it the biggest crowd-funded game to date.

Of course I have pledged to help, and whilst I'm not at all an MMO player, having it as an optional extension to the game's 'universe' after completing the single-player campaign as an MMO, with no subscription fee, and only a Guild Wars 2-style store (which sells only cosmetic and convenience items that don't grant any actual in-game power) sounds pretty fantastic to me!

The fact that Chris Roberts himself is the main person behind this is very reassuring; that, and not having a big publisher to push him around, tell him what to do, and force impossible deadlines, is also good. The physics, scale, and engine demos for the project are already very impressive.

This game I've definitely pledged to, and it will be a tough two years waiting for them to develop it.