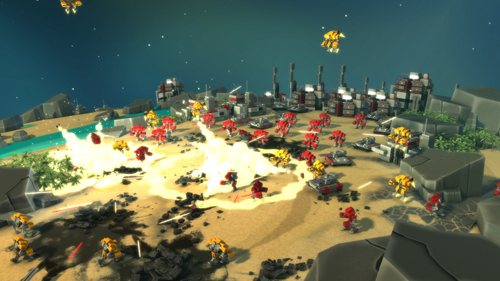 The idea of crowd funding has really taken off in the past year or so. Headlined most prominently by US-based Kickstarter, it enables people who want to raise money for something to easily pitch their idea to anyone on the internet, who can in turn pledge a certain amount of money often in return for some rewards once the project gets off the ground. It's a great way to raise early capital for a project without having to go to banks, or relinquish part-ownership to venture-capitalist firms.

I hadn't yet previously supported anything on Kickstarter or on other crowd funding sites. Before today that is.

Today one Kickstarter project caught my eye as news of it was spreading around gaming sites: Planetary Annihilation - A Next Generation RTS.

I've made no secret over the years that the original Total Annihilation (TA) is probably one of my favourite games of all time. Other than the near-perfect RTS game it was at the time, it had the most fantastic classical soundtrack that I still have in my music library to this day.

This new Kickstarter project from Uber Entertainment aims to develop a TA-inspired RTS game on a planetary scale. To hammer in that fact, they even got the same voice-over guy from the original TA to narrate their pitch video. The original TA intro still gives me goosebumps, I can recite word-for-word the narration, and the D-Gun sound effect at the end is still legendary.

The studio is planning on developing the game without any big-publisher involvement, which along with their inclusions of offline/LAN support and no DRM is pretty admirable. It'll be interesting to see the end result of the development if the project gets going, which judging by the $250K raised in just the first day, looks very likely.