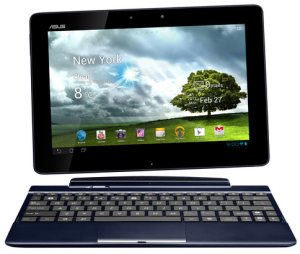 Last week I gave in to the tablet culture and got one.

I've been increasingly using my phone to access the internet whilst watching TV for various live social and sporting events: recently I've been posting on Whirlpool while watching live Euro 2012 matches, and also used SBS's great social media effort for this year's Eurovision.

In my opinion this is where tablets or iPads really shine: as a couch-based internet access device. Where laptops are too clunky and cumbersome, and phones too small and finicky, a tablet is the perfect tool for quick internet or social media access for the living room.

Almost 4 years ago exactly we bought one of the initial Asus EeePCs, mainly to take with us on our European trip later that year, but I did also envision it to be that couch-type internet device. It never really lived up to that, and the continuing existence of our 'proper' laptop meant that I sold the EeePC not long after we returned from our trip.

Earlier this year I had a quick look at what tablets were out there. I wasn't going to get an iPad; for the price I was wanting something a little more than a glorified phone without the phone. The other obvious choice was an Android-based tablet. I really liked the Asus Transformer Prime; as a semi-laptop-replacement I really loved the keyboard dock, although the high price ($700+) and reported WiFi issues meant that I wasn't that interested.

However recently, Asus released another Transformer - the TF300T - which is mostly identical to the Prime, but with slightly cheaper materials, working WiFi, and ~$200 less expensive. For the price it's better than most other tablets, with accessible card slots and even a full-size USB host port on the keyboard dock.  They seem to be quite popular at the moment, as most stores only had their display stock left when I went hunting for one.

After finding one for a decent price, it has been great so far. Quick internet browsing and TV ad-break procrastinating is a breeze. It's a lot easier and quicker to do a quick email-check than turning on a computer or using my phone.

I can see why Microsoft and other computer and OS manufacturers are a little scared of this market: for some people this type of device could do away with the traditional computer completely, especially this Asus series with the keyboard dock making it a very viable laptop alternative.

For me, there's no threat to a tablet replacing our desktop computers, but for the casual internet user it's a distinct possibility.