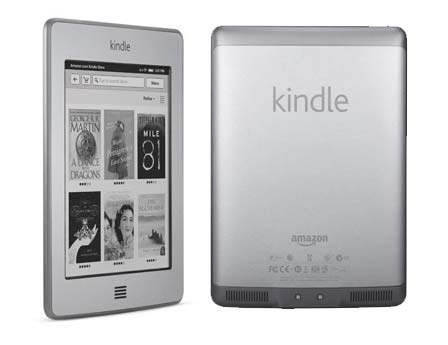 When we got married over 6 six years ago, I stopped reading books. I'm not totally sure why - maybe it was being more busy and more tired - but other than a select few non-fiction books, I haven't read a single fiction book in the last six years since.

Recently, after going to bed at night it has started taking me a while to get to sleep, and I've realised that previously I would have used this 'non-sleeping time' to read a book.

So I decided to get back into reading.

I bought a Kindle Touch e-reader direct from Amazon, and have started re-reading a few of the old Star Wars: X-Wing books that I loved as a teenager.

I'm enjoying reading on the Kindle far more than I have expected to. The adjustable text sizing and spacing means that I can read the text at a size I can set and is comfortable for me, and having multiple books on the one device is so convenient. The e-ink display makes reading infinitely much more comfortable compared to tablets, phone, or computer screens.

There has been problems though; the Kindle that I received had a small defect: the back cover was a little loose and would flex and creak when held in certain ways. I contacted Amazon, and they speedily sent out a replacement.

The replacement's back cover was fine, but there was a weird defect on the screen itself which is apparent when you lock the device and a nice screensaver image is set on the screen. The very left edge of the screen on the first column of pixels look corrupted and out-of-place. This was something the first Kindle that I received didn't have a problem with.

So I contacted Amazon again, and they again speedily sent out another replacement. However that replacement had the same issue as the previous one.

Move forward a week or two, and throughout three (3) different replacements that have been sent to me, all three have had the same screen issue that isn't present on the first device that I received (although all three replacements have had acceptable back covers).

Although I've rung Amazon and attempted to explain to them that they probably have a bad batch or a manufacturing problem, all they can do for me is keep sending replacements or for me to return, or for me to return the original one for a full refund.

I'm hesitant to just give up on it; I know there are other e-reader devices out there, but I like the Kindle and especially the ease of use Amazon has for the Kindle Store in terms of buying and downloading new content, so I'd prefer to try to keep with it.

Right now they're sending out a fourth replacement, and if it's the same as the previous three I think I'll persevere with the flexy-back of the first one I received and try to barter some kind of partial discount for it.

1 thought on “Getting Back Into Reading & Kindles Everywhere”